Manhattan, Kan. (westernkansasnews.com)–Former Kansas State great and NBA player Rolando Blackman waas inductetd into the College Basketball Hall of Fame Friday night in Kansas City. Saturday, Blackman had the opportunity to talk with the media at halftime of the K-State/Iowa State football game.

Blackman played for coach Jack Hartman from 1977-1981, earning Big 8 Player of the Year in 1980. He guided the Wildcats to an 80-41 record during that time, including the famous shot that sent Kansas State to the Elite 8 in 1981 that upset Oregon State. That image was printed on the cover of Sports Illustrated. Blackman’s 1,844 points at K-State is third best in program history. He also was the three-time Big 8 Defensive Player of the Year from 1978-1980.

Following his time in Manhattan, Blackman was drafted ninth overall by the Dallas Mavericks in 1981, and played for them for 11 seasons, scoring 16,643 points. In his 13-year career, he was an all-star four times. 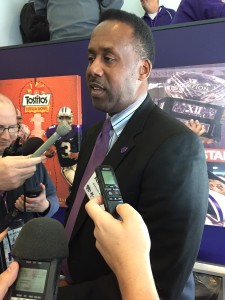