Garden City, KS (westernkansasnews.com)-The Broncbusters have made a living of playing in close games the past three years.

The difference now is that they are finding ways to win them.

“Our guys were ready to go home,” Head Coach Brady Trenkle said. “And I think you saw that with our performance in the first half. But we took care of business after the half.”

Garden City outscored the Red Ravens 50-35 in the final 20 minutes and took their first lead of the game on Diontae Jones put back with 12:10 left. The freshman, who transferred from the University of Wyoming, tied a season-high with 13 points, 11 of those came in the second half on 5-of-7 shooting (71.4 percent).

“He (Jones) is really starting to come around,” Trenkle said. “He’s finding his role with this team.”

JT Bennett enjoyed one of his most complete games of the season, scoring 11 of his 13 points in the second half while recording a team-best five steals.

“Sometimes it’s hard to figure out some of JT’s turnovers,” Trenkle said. “But then you look at the stat sheet and you see the five steals; that’s what he does for this team. And tonight he took the ball to the rim. He played well.” 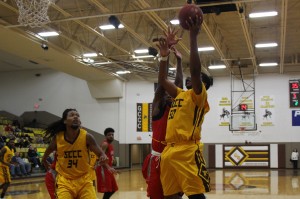 Early on though it was Coffeyville (7-7, 0-3) setting the tone in the Broncbusters’ gym.

The Red Ravens jumped out to a 12-2 advantage with 16:40 remaining in the first half. Eventually that lead grew to 21-9 after Jailen Gill split a pair of free throws at the 11:40 mark.

That’s when Josh Fleming put his foot down, scoring seven straight points as Garden City (10-4, 3-1) closed the first half on 19-14 run to pull to within seven at the break. The freshman finished the night with 11 points but was held scoreless over the final 20 minutes.

Bennett and Jones grabbed the torch and ran with it. Sprinkle in a little Zach Beard, and the Broncbusters earned their first win over the Red Ravens in more than a decade.

Beard’s triple with 11:37 to play gave the brown and gold a three-point edge. After Coffeyville fought back to grab a two-point lead, it was Bennett draining five free throws to the put the Broncbusters back on top. Jones hit a driving layup followed by Gilbert’s 3-pointer from the top of the key that pushed the advantage to six 64-58 with 2:40 to go.

From three, the flood gates opened.

“We just have to keep working,” Trenkle said. “I think this break comes at the right time. My guys are exhausted. They just finished finals; they all passed. Now it’s all about them staying in shape over break. That’s what I’ve stressed to them.”

Coffeyville was playing without arguably the best player in the conference in Oklahoma-commit Darrion Strong, who was parked on the bench with his arm in a sling. In his absence, the lethal 3-point shooting team was held in check, missing on 14 of their 20 trey attempts.

The Red Ravens still produced three double-figure scorers led by Delano Spencer’s 11 points. Delshon Strickland, who took a hard spill midway through the second half, tallied 10 as did Jovan Barksdale.

Garden City, KS (westernkansasnews.com)-The Broncbuster women had a chance to do something on Saturday night that they had not done in three years—that’s win a fifth consecutive game.

Everything appeared in order except for one minute detail: Coffeyville had no plans of conceding anything.

Alanie Fisher led four players in double figures, Jazmine Torian recorded her second double-double of the season with 11 and a game-high 10 boards, and Coffeyville raced past the Broncbusters 70-57 at the Perryman Athletic Complex.

“We weren’t ready to play-it’s that simple,” Head Coach Nick Salazar said afterwards. “That’s on me.” 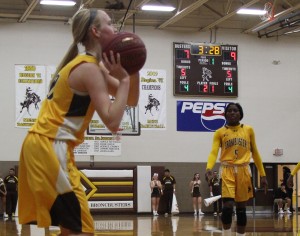 Early on was a different story, as Garden City (9-6, 3-1) held a 15-12 lead at the end of the first quarter. But the team Salazar sent back out onto the floor for the second period was no match for the red-hot Red Ravens.

“It’s disappointing how we played,” Salazar said. “I couldn’t really get a gauge on this team early in the day-although they looked and sounded very confident before the game.”

After Coffeyville stretched the lead to 19 in the third, the Broncbusters finally fought back. Donasja Scott, Jaymie Bernbeck and Shala Dobbins sparked an 8-0 run that cut the deficit to 11. Then in the fourth, DaRae Lewis’s and-1 and Dobbins two free throws pulled the Broncbusters to within five 60-55 with 4:30 to play.

“I thought we had it when we started making the run,” Salazar said. 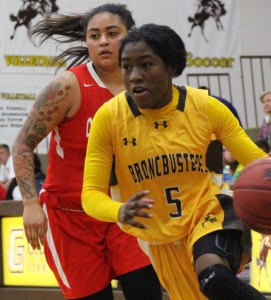 Kavita Akula missed a wide-open 3-pointer from the top of the key that would have cut it to two. Garden City scored just two points over the final 4:30, and the Red Ravens put the Broncbusters away by scoring the game’s final eight points.

“We have to keep our head up and keep matriculating,” Salazar said. “These girls are coming together, and I was proud of how they fought back in the second half.”

Dobbins scored 22 points to pace the Broncbusters, but she missed 14 of her 20 shots from the field. Scott added 11 and Classen hit three triples in the first quarter to finish with nine.