The senior made sure that did not happen again.

Koster scored a season-high 21 points to lead four Buffaloes in double figures as Garden City held on for a 58-55 win over Palmer Ridge, CO Thursday night at the Garden.

“We played much faster,” Head Coach Jacy Holloway said afterwards. “A big reason for that was the fact that they pressed us.”

Press or not, the Buffaloes played at the tempo that the sixth-year head man has been asking for through his team’s first four games.

And Koster ignited it.

His driving layup one minute into the game got his confidence back. His 3-pointer with 3:43 left in the period capped a 7-0 run that gave the Broncbusters a lead they would never relinquish.

“It was good for him (Koster) to see the ball go through the net,” Holloway said. “I don’t know what happened in Hays last week.”

Although Koster was the main catalyst, he had plenty of help. Garret Doll scored a season-high 13 points, teaming up with his backcourt mate to score the final six points of the night for the Buffaloes.

“We made a lot of mistakes in this game,” Holloway said. “But we still found a way to win the game.”

Garden City led by nine with less than five minutes to go in the game. But Palmer Ridge (1-2) refused to go away, and when George Silvanic hit a scoop shot in the lane, the Bears trailed by only two 53-51 with 1:20 remaining. Koster answered by blowing past Silvanic for a layup to stretch the lead back to four. Yet three times in the final 30 seconds, the Bears pulled to within a single possession only to be turned back each time.

“We’ve got a long way to go,” Holloway said. “But this was a step in the right direction.”

Scott Schmidt added 12 points and 2 rebounds for Garden City, who shot 40 percent for the first time this season. Griff Brunson totaled five off the bench.

Tyler Trego paced the Bears by hitting 4-of-8 3-pointers; he finished with 14 points. Silvanic recorded his first career double-double with 11 points and 12 boards.

The lead changed hands twice in the first three minutes, with Garrett Doll’s steal and layup giving Garden City (2-2) a 7-5 lead. The Buffaloes built that edge to as many as seven late in the first but went scoreless the final 2:12 of the period. Palmer Ridge answered with a 7-0 run to tie the game at 17; one of three ties in the first half.

Garden City, KS (westernkansasnews.com)-Tiffany Butler’s basketball career was in doubt. For that matter, so was her future in any sport.

Butler had offseason hip surgery last year to repair a torn labrum. A few months later she was back, proving to be a pivotal defender in the final half of the 2014-2015 season.

On Thursday night, she was the best player on the floor.

The senior scored a career-high 12 points and recorded five steals as the Buffaloes pulled away late for a 58-45 victory over Palmer Ridge, CO. at The Garden.

“She (Butler) was really good tonight; especially on the defensive end,” Head Coach David Upton said afterwards. “She gave us that spark that we needed. She definitely got us going in the right direction.”

Butler was sensational as much as she was efficient. Her floor game was nearly flawless, and when the Bears made it a one-point game in the third quarter, it was Butler draining a trey from the left corner to give Garden City (2-2) a 32-28 advantage. 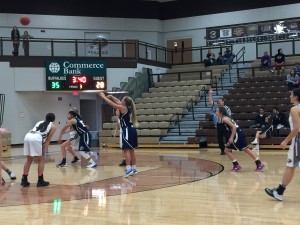 But the multi-sport athlete saved her best for the final quarter, scoring six points, including a coast-to-coast layup in the final seconds that punctuated an 8-0 run and sent the Bears packing with their second loss in three games.

Jessica Carillo notched a double-double with 12 points and 10 rebounds for the Buffaloes. Joslyn Munoz added 11 and Abbie Dart had 10, although the junior guard was held scoreless in the second half.

Marie Koogle scored 10 points to lead the Bears, who shot under 40 percent for the third straight game. Regan Mukpik totaled nine points and hit three 3-pointers, including back-to-back triples that made it a five-point game with less than 3:00 to play.

“It wasn’t pretty at times,” Upton said. “But we’re slowly getting there.”

Garden City trailed early 4-2 before Butler’s first triple finished off a 5-0 run and gave the Buffaloes a 7-4 advantage. That lead ballooned to as many as eight in the first half when Aerianna Stinemetz connected on a 3-pointer from the wing.

Closing strong: Garden City hit buzzer beaters to end all four quarters—Lexi Hogan drained a baseline jumper at the end of the first; Abbie Dart closed the first half by burying a shot from the elbow; Stinemetz beat the third-quarter buzzer with a layup as did Butler in the fourth