“It’s final’s week; there’s so much pressure on these guys,” he said. “

Although it wasn’t the cleanest performance of the season, if Trenkle’s guys were stressed, they sure didn’t show it.

Josh Fleming scored 12 of his 19 points in the second half, Diontae Jones added nine and seven rebounds, and Garden City posted a wire-to-wire 83-73 victory over the Red Devils Wednesday at the Perryman Athletic Complex.

“This is a good win,” Trenkle said. “Allen was a very good team. Look at the teams that they lost to. It’s good to get this one out of the way.”

Caleb Tramp’s two-handed flush following a Red Devils’ turnover stretched the Broncbusters lead to eight 19-11 with 11:17 to play until halftime. It was the freshman’s lone bucket of the night.

“It’s good to be able to get contributions across the board,” Trenkle said.

That lead swelled to as many as 12 in the second half when Brandon Jones split a pair of free throws with 15:08 to play. But Garden City could never pull away.

Jermaine Long, who came in sixth in the conference in scoring, netted five straight points before Darnell Jones-Bowie’s 3-point play pulled Allen County to within four 60-56 with 9:00 to go. But again it was Fleming, draining four consecutive free throws and connecting on a trey to push the lead seven. 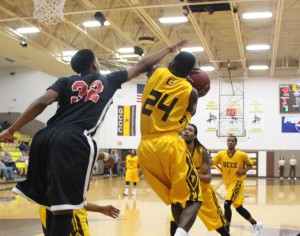 “I’m proud of these guys,” Trenkle said. “My players are exhausted.”

The Red Devils made one more push in the final minutes, closing to within five 74-69 with 2:24 remaining. But Allen County’s offense went south, Garden City scored seven straight, and the Broncbusters won their second consecutive conference game.

“We’ve got one game left,” Trenkle said. “Then these guys get a break. They haven’t been home in a long time. It would be nice to go into the break 3-1.

J.T. Bennett sank 6-of-8 free throws to finish with eight points for Garden City. Gage Loy added eight, including long, 30-foot 3-pointer with the shot clock winding down that gave the Broncbusters a 70-62 advantage with 4:57 left.

Tip ins: Garden City had 19 assists on their 26 made field goals…the Broncbusters were outrebounded (36-33) for only the fifth time this season…Both teams were in the double bonus at the 11:00 mark of the second half…Antorian Moore fouled out with 2:24 to go…Broncbuster guard Aaron May missed his second straight game after breaking his wrist in practice last Thursday; he’s expected to miss six weeks

Garden City, KS (westernkansasnews.com)-Garden City Coach Nick Salazar never had to worry about getting his team up for road games against Butler and Independence.

But a home contest with an Allen County team that had lost 14 straight conference games going into Wednesday’s matchup; now that was a bit more of a challenge.

Kavita Akula led five different girls in double figures with 15 points, Jaymie Bernbeck and DaRae Lewis ripped down nine rebounds apiece, and the Broncbusters survived a scare from the Red Devils 73-67 on Wednesday night at the Perryman Athletic Complex.

“This was a terrible performance,” Salazar said afterwards. “We are just fortunate that we were more talented than they were. But credit Allen; they came out with a great game plan.”

That plan had Allen County (4-9, 0-3) up 6-0 early, thanks to Damonica Franklin’s three straight buckets to begin the game. After Ashley Washington’s two free throws, it was Franklin’s bank shot from the stripe that gave the Red Devils their largest lead of the game 10-3 with 5:35 to play in the first quarter. 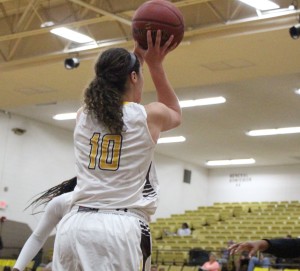 “It was bad basketball all the way around,” Salazar said. “We let them hang around.”

Eventually talent took over, and Donasja Scott’s triple from the right wing gave the Broncbusters their first lead 26-25 with 2:14 to go in the first half. Then Bernbeck hit a turnaround jumper from the baseline, and Garden City (9-5, 3-0) took a one-point edge into the locker room.

That’s all the Red Devils did in the second half, tying the game three different times, before grabbing a 59-57 lead with less than 7:00 to play. But Akula drilled two 3-pointers, Shala Dobins converted a transition layup, and Garden City had a six point lead.

Allen County had a chance to pull back to within four late, but Ariyha Sorrells missed two free throws down the stretch. Jenna Classen converted on hers, and the Broncbusters won a fifth straight game for the first time in two years.

Dobbins added 15 points for the Broncbusters, but she committed a season-high 11 turnovers. Lewis scored 14 points, 10 of those coming in the first half. Bernbeck tallied 12, and Classen 11.

Franklin scored 10 of her season-high 18 points in the third quarter for Allen County, who lost their seventh straight game. Arlt added 14 points on 5-of-9 from the field.

Tip ins: Allen County shot 46 percent from the field—that’s the highest Garden City has allowed all season…The Red Devils stayed in the game with the long ball, burying five 3-pointers in the second half-finishing the night 8-of-18 from downtown (44 percent)-it was the eighth time this season that Allen County has hit six or more triples…Garden City is off to their first 3-0 start in conference play since 2009-2010…Garden City turned it over 19 times, a game after giving it up a season-low eight times vs. Independence…Dobbins shot just four free throws (it was her second lowest total of the season-lowest two vs. Odessa)