Dodge City, KS (westernkansasnews.com) Friday was a good night for the Dodge City High School basketball teams. It came oh so close to being a great night. The Red Demon girls came from behind to hand McPherson only their second loss of the season 45-39, while the Dodge City boys took The Bullpups to double overtime before losing 75-69 at the hands of the two time defending state champions.

The Dodge City girls jumped out to a sluggish start offensively only scoring 4 points each over the first two quarters of the game and being held to seventeen percent from the field. It was the defense that came to the rescue in keeping McPherson in check and not letting them get out to an insurmountable lead. Lady Bullpups leading scorer Taylor Robertson was rattled by the Demon defense in scoring 17 points far short of her two 30 point performances this season and a 41 point output last year.

In the second half, Dodge City came alive hitting nine more shots than in the first half (4-24 to 13-24) for over fifty percent and took the battle to the Bullpups on the boards 35-25 (including 11 offensive rebounds)
in closing out on a 21-9 run over the last eight minutes to win the game and improve their record to 9-5. Tia Bradshaw had seven rebounds, senior Jessie Harshberger had 11 points and 5 rebounds.

Five different players also lit it up from the outside led by Bailey Shelor who went 2 of 3 in three point attempts.

The boys tried to use the same formula to win their game stepping it up on the defensive end. Dodge City jumped out to their biggest lead 43-32 at the end of the third quarter against the state’s number one ranked team in 4A-I. Drew Pyle clawed his way to 15 points through regulation. In overtime Pyle took over. 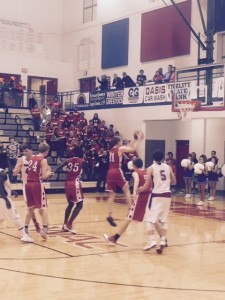 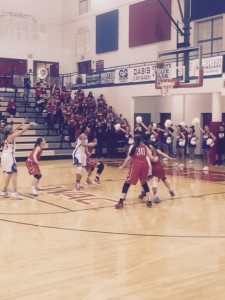 Pyle scored 12 points combined in the two overtimes. One of his shots was a 25 footer off a screen that rained in and the other two big buckets came on releases deep where Drew’s brother Ben threw baseball passes over the top for easy layups.

Dodge forced a second overtime when senior Caden Walters underhanded a swooping pass to Matt Karnes at the basket for an easy two with just four seconds left in the first extra period. For the game Dayton McGroarty had 20 points for Dodge City, Eric Reid had 12 along with 2 three pointers. Noah Williams had his first double-double since early Janaury 12 points and a season high 14 rebounds.

Lost in the mix were two positive stats for Dodge City (5-9). The Red Demons outrebounded the Bullpups 37-23 (15-9 on the offensive glass) and shot 53 percent from the field including 62 percent in the second half, best this year.

The Demons have played three number one teams this year (0-3 to Central Plains, Maize and McPherson), but have taken the last two down to their final minute or into overtime with a chance to win.

Dodge City will be back home Monday night to face Garden City in a game postponed last Tuesday. Pre-game is at 5:45 on Z98 and westernkansasnews.com. The girls tip at 6 and the boys at 7:30.