The Holcomb Longhorns overcame penalties, a fumble inside the 20, too many negative plays, and the nearly 200 yards rushing of Cimarron’s Josh Seabolt, to beat the visiting Blue Jays 15 -12.

Neither team scored in the opening half. After Holcomb forced a Cimarron punt on the opening series, the Longhorns drove to the Blue Jay 13, but a muffed hand-off from Trey Gilbert to Kaden Tichenor gave the ball back to Cimarron and snuffed out a promising drive.

On the next Blue Jay possession, Holcomb’s Andrew Morss deflected a punt and the Longhorns took over at the Cimarron 47. Holcomb drove to the 7, but couldn’t convert on fourth and goal, turning the ball over on downs. The Blue Jays responded by driving 69 yards to the Longhorn 24, but a penalty and a 5 yard loss on a halfback-option play pushed Cimarron out of field goal range and the Blue Jays turned it over on downs.

Holcomb would get a golden opportunity late in the first half, when the Longhorns recovered a fumble at the Blue Jay 37. Holcomb got to the 20, but 2 incomplete passes, a sack and a penalty kept the Longhorns from taking advantage of the turnover.

Peyton Leonard sparked the Longhorns at the start of the third quarter, returning Cimarron’s kickoff 43 yards to the Blue Jay 35. Tichenor then rattled off back-to-back 14 yard runs and Gilbert finished off the short drive from four yards out. Chance Rodriguez split the uprights with the PAT and Holcomb led 7-0.

Cimarron responded with a 9-play, 72-yard drive, capped off by Seabolt’s 4-yard run on fourth and goal. The big play was a 44-yard romp by Seabolt to the Holcomb 20. But the Longhorns stopped the 2-point try and led 7-6.

Holcomb would punt on its next two possessions sandwiched around a missed 40-yard field goal attempt from Cimarron’s Jesus Aguilar. But after a short Longhorn punt, the Blue Jays started at the Holcomb 37 and six plays later, Seabolt shot through for a 20-yard TD run and Cimarron led 12-7with 7:38 to play.

The Longhorns mounted a 12-play, 80-yard drive to regain the lead on Gilbert’s 3-yard scamper. The key play came when Andrew Morss reached over the defensive back to take away an interception and haul in the ball at the Blue Jay 3, setting up the go-ahead score. Gilbert then hit Chance Rodriguez for the two-point conversion and Holcomb led 15-12, with 3:30 left to play.

Cimarron’s last chance ended when Seabolt fumbled and Holcomb recovered at its own 44. The Longhorns ran out the clock to seal the victory after Gilbert picked up a crucial first down on fourth-and-short.

Trey Gilbert scored both Longhorn touchdowns on the ground, finishing with 64 yards rushing, despite being sacked three times. He completed 7 of 18 passes for 130 yards. Holcomb had 267 yards total offense. Josh Seabolt rushed for 187 yards on 32 carries, scoring both of Cimarron’s TDs, but also had the crucial fumble at the end of the game.

Cimarron will host Stanton County on Friday and Holcomb will travel to Scott City with both teams coming off season-opening wins. 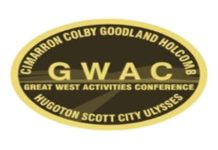