GARDEN CITY, KAN. — ‘Tis the season for giving! Alta Brown Elementary School is the proud winner of the much-anticipated 2018 National Red Ribbon Photo Contest. Students, faculty and staff were fearlessly led by Charity Saddler in decorating the campus with this year’s theme, “Life is Your Journey. Travel Drug FreeTM”. This was done in addition to the school’s traditional Red Ribbon Week ® (Oct. 23-31) celebrations to promote their commitment to living a healthy and drug-free lifestyle.

The contest takes place each year as a part of National Red Ribbon Week – the nation’s oldest and largest drug prevention campaign, sponsored by the National Family Partnership (NFP). Charity Saddler will receive an iPad from NFP and the school will receive a $1,000 prize from contest co-sponsors, the Drug Enforcement Administration (DEA), to be used toward drug prevention.

Red Ribbon Week began in 1985 after the abduction and murder of DEA Agent Enrique “Kiki” Camarena. The first ever National Red Ribbon Week was organized by the National Family Partnership in 1988. NFP continues to sponsor the campaign for families, schools and communities across the nation each year. Since its inception, the campaign has touched millions of lives to promote and celebrate drug free living.

“With our nation’s current opioid epidemic, drug prevention is more important than ever,” saysNFP President Peggy Sapp. “We designed the contest to involve families, schools, and
communities in delivering drug prevention messages to children in a fun and uniting way. We are inspired by the winners and their wonderful stories about spreading the Red Ribbon message in their homes, schools and communities.”

Nationally, the contest named 20 winners – ten home entries and ten school entries in various regions throughout the nation. The money earned for winning the contest will go to support the school’s drug education and prevention programs, thanks to the Drug Enforcement Administration, the contest’s co-sponsors.

“Congratulations to the winners of the National Red Ribbon Photo Contest,” said DEA Acting Administrator Uttam Dhillon. “Thank you for engaging your families, schools and communities in the important conversation about drug education, prevention and living a drug free life. The DEA is pleased to support the continued work in your schools to prevent drug abuse and misuse in your community.”

Close to 30,000 votes were cast in support of more than 350 contest entries. See all 2018
winning photo entries at http://redribbon.org/contest/winners.

“Drugs and alcohol negatively affect our brains and bodies and our ability to learn and grow,” said Julie Koerperich, Principal. “Prevention measures help stop the threat of abuse and play a huge role in making entire communities safer and healthier.”

To learn more about Red Ribbon Week and the contest, visit www.RedRibbon.org. 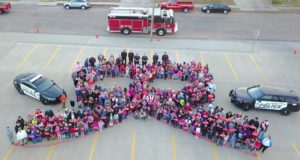 Haskell and Finney County roads to close at U.S. 83