Roger Austin of Bucklin was recently recognized for 20 years of service to KDOT and Southwest Kansas.

In his current position, as the crew’s EO Specialist, Austin is responsible for helping organize and oversee the crew’s activities, performing preventive maintenance and minor repairs on equipment, assisting with snow and ice operations, preparing maintenance reports and managing material, equipment and personnel utilization.

He says the things he enjoys most about his job are the summer hours and having most weekends off. While he has many memorable moments at KDOT, responding to the Greensburg tornado is easily one of the most notable. Austin remembers when the call came in that the Greensburg community had been hit and the crew’s mobilization that night. He and the Bucklin crew and many others would work on clean up every day for the next two to three months. 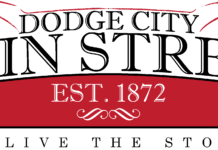