Holcomb, Kan. (westernkansasnews.com)–Both Holcomb and Scott City can summarize their seasons as a roller coaster. While the Beavers won the first two games, with one of those dominant in Holcomb on February 3, and never trailed at home on February 21, the third meeting in 29 days went completely different. The Longhorns jumped out in a big way and never looked back, as they would pick up a 74-51 win over Scott City to advance to Thursday’s sub-state semi-final round in Cimarron.

Scott City pulled to within 21-13 with 6:21 remaining before the break, and that was as close as they got the rest of the night. The Longhorns would score 15 straight points in a two and a half minute stretch to open up a 36-13 lead with 3:36 left before recess. Both teams traded runs of five straight, before Holcomb (13-8) took a 41-18 lead into the locker room.

In the final quarter, the Longhorns led by as many as 28 points on a pair of occasions, before settling for a 74-51 win. Both teams would score 33 second half points.

Holcomb had a big night from Jackson Stoppel and Zephyn Mason. Stoppel led all scorers with 26 points, while Mason added 22, and Cooper Autry had 15 points. The Longhorns were 18-21 at the free throw line and finished with 15 turnovers. Scott City got 14 from Jackson Lewis, 12  from Hunter Yager, and 10 by Parker Gooden. They went 7-12 at the foul line and had 14 turnovers. Holcomb won the rebounding battle 30-27.

In the win, Holcomb has evened up the series in postseason play at three wins apiece. It was the first time they played Scott City at home in sub-state. The other postseason meetings took place in Scott City twice, and Cimarron, Larned and Southwestern Heights. It was the first time since March 2, 2004, that the Beavers opened up on the road in sub-state play, when the fell to Hugoton 50-48. With the loss, Scott City finished with a sub-.500 record for the first time since the 2003-04 season. Holcomb snapped a two-game losing streak in the series, as the Beavers still lead the all-time series 32-26.

In the other sub-state games in the Cimarron Sub-State on Monday, top seed Lakin pulled away in the second half for a 75-55 win over Goodland, Hugoton survived an early scare from Cimarron, and took a 74-55 win, and Colby defeated Southwestern Heights 71-59. Lakin and Holcomb will meet up for the second time on Thursday, while it’s round three between Hugoton and Colby on Thursday in Cimarron. 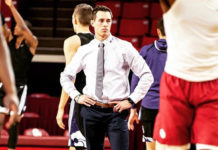