Linda grew up in Mud Lake, Idaho and graduated from West Jefferson High School. She worked as a cook and at the potato factory. In 1991 she moved to Kansas and lived in Lakin and Deerfield before moving to Ingalls. She worked as a cook for the Ingalls schools and as a cashier for the Cimarron Presto Store. She enjoyed her computer, gardening, music and her pets.

She was preceded in death by her mother.

Memorial contributions may be given to the Linda Befort Memorial Fund in care of Garnand Funeral Home. 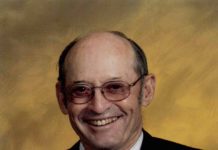