Lee Richardson Zoo staff is mourning the passing of Moe, a thirty-six-year-old turkey vulture. Turkey vultures are known to live up to 16-20 years in the wild and 30 years in human care. Moe had been under veterinary care for age-related issues for the last few years. Moe passed during the night. The zoo veterinarian examined him the next day and determined that Moe passed due to age-related complications. 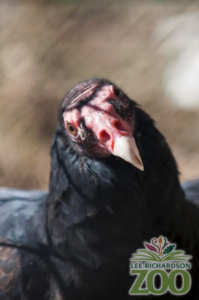 Moe will be greatly missed by keepers and guests alike. He truly enjoyed having people come by. When Moe would see a keeper or a guest, he would walk to a spot in his habitat that allowed him to get as good of a view of his guest as they could of him. Moe liked to watch people as they watched him or other zoo residents nearby. He developed a fan base among several guests who always made sure to visit him any time they were at the zoo.

The turkey vulture is the most widespread vulture in North America. They can adapt to a wide range of habitats. They have an excellent sense of smell and can detect carrion from over a mile away. As scavengers, turkey vultures help clean up the environment.

Moe came to the Lee Richardson Zoo in 1984. Exactly when or where he hatched is unknown. His age was estimated based on his appearance when he arrived at the zoo. Moe was non-releasable to the wild. He lived out his next thirty-six years comfortably in the care of Lee Richardson Zoo staff while serving as an ambassador for his species and other wildlife.