Garden City, KS (westernkansasnews.com)-During his introductory press conference back in December, Broncbuster football coach Jeff Sims acknowledged that there would be challenges along the way.

“We have a lot of work to do,” Sims said nine months ago. “We’re ready to get to work.”

All Saturday proved is that Sim’s original statement rings true: his 2015 Broncbusters are a work in progress.

Jujuan Young-Battle threw for 256 yards and three touchdowns, and the Ellsworth defense forced four Garden City turnovers as the Panthers beat the brown and golf for the first time in nearly a half century 38-14 at Broncbuster Stadium.

“We lost this game well before kickoff,” Sims said. “We’re not doing the things we need to do Sunday thru Friday, and that’s a reflection on me. I have to be better.”

It also didn’t help that Sims was without his starting quarterback Jayru Campbell, who was in uniform but did not play. Instead the first-year coach inserted true freshman Luke Walstad, who was shaky from the start.

“It wasn’t all about our quarterbacks,” Sims said. “This goes well beyond the football field.”

The last time Walstad threw a pass in a live game was in last year’s 4A state title tilt. The game speed has definitely changed since then.

On Garden City’s opening drive, Walstad was tasked with pooch punting after the Broncbusters went three-and-out. That plan blew up quickly when Tyler Chaudoin blasted up the middle, blocked the kick and jumped on the ball in the end zone for an Ellsworth touchdown. The Panthers failed to convert the two-point conversion and led 6-0 with 8:30 to play in the first. 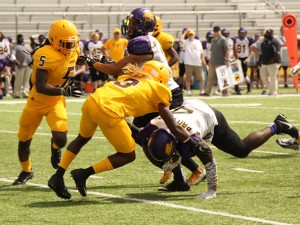 “We’re not a very good football team,” Sims said. “We didn’t go out there and do a very good job today.”

It was a sign of things to come. But despite early mistakes, the Broncbusters had two different chances to take the lead early in the game. Both backfired.

First they recovered a punt that deflected off one of the Panthers’ up men, which Edward Rolle pounced on at the Ellsworth 3. But Garden City (1-2, 1-1) lost a yard on three plays and watched Kevin Olney’s 22-yard field goal hit off the right upright.

Later in the opening period, Panthers’ punter Timothy Tutton could not field a bouncing snap, and Ben Hall recovered for Garden City at the Ellsworth 22.

Walstad’s best throw of the afternoon came three plays later, when he connected with Ben Phillips on a third-and-12 down to the Panthers 12-yard line. But the drive stalled at the 7 before Olney pushed a 25-yard field goal attempt wide to the left.

“We couldn’t finish anything today,” Sims said. “We need to change some things up.”

Tutton’s 72-yard punt in the second quarter pinned Garden City at their own 1-yard line. On the very next play, Walstead completed a shovel pass to Eddie Morris who was tackled by Rakeem Wiggins in the end zone for a safety. 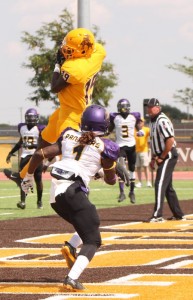 The Panthers then took the free kick and drove 48 yards in seven plays to the Broncbuster 1. But Young-Battle’s fourth-down pass to Isaiah Smith fell incomplete, and Garden City took over.

It was a curse in disguise.

In the shadow of their own goal posts for the second straight possession, things could not have played out any worse. On third-and-10, Walstad was stripped by Wiggins in the end zone. Guard Donald Rocker recovered, and the Panthers were awarded two points.

“I think we hope things are going to happen a lot of the time,” Sims explained. “Instead of going out there and creating opportunities, we’re sitting around hoping.” 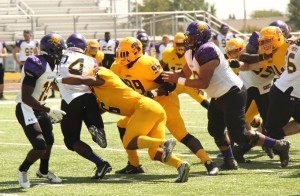 Morgan Freeman said it best in The Shawshank Redemption: “hope can drive a man insane.” Whether that’s true or not, Sims finally made a change before halftime.

Porter’s reality was this: two of his first six passes were picked off; the second of those eventually led to Young-Battle’s second touchdown pass of the day-a 16-yard touch pass to Smith in the left corner of the end zone that gave Ellsworth a 24-0 lead with 1:13 remaining in the first half.

“Right now, we’re not earning it enough,” Sims said. “And it’s not for a lack of putting in time. We are putting in plenty of time. But I can’t say for certain, if I called a meeting right now, that everyone would show up. I had two guys miss one this morning.”

But just when you were writing off Porter, the transfer showed some moxie, engineering a 10-play, 82-yard drive at the end of the first half.  He completed 5-of-7 passes, including a four-yard touchdown to Phillips, whose chest-high grab pumped some life into a crowd that had been silent for most of the first 30 minutes.

But the damage was done.

Porter’s first drive of the third quarter ended the way his first two did-with an interception. KeAaris Ardley’s pick set the Panthers up at the Garden City 23. On the next play, Young-Battle hit a wide-open Boone, who had beaten both Jonathan Cook and Lonnie Johnson for a score. Koddy Hildreth’s extra point gave Ellsworth a 31-6 cushion with 10:15 to go in the third.

Interestingly enough, Porter’s fourth turnover of the day came on the quarterback’s best play of the afternoon. On third-and-9 from his own 29, Porter called his own number, knifing his way into the Panther secondary. But as he crossed midfield, Devin Brockington poked the ball free from behind and Ardley recovered for Ellsworth at the 38.

“I didn’t come into this game thinking we were going to lose,” Sims said. “But the truth of the matter is we just aren’t there. We had to start practice over once this week. Those things have to be fixed before we can be a good football team.”

Porter had some personal redemption early in the fourth when he scored on a sensational five-yard quarterback keeper.

But it was too little too late.

The Panthers added a touchdown in the fourth when Xavier Washpun blasted in from four yards out, sealing Ellsworth’s first victory over Garden City since the Sterling Silver Bowl in 1967.

“We will go back and do some things differently this week,” Sims acknowledged. “I apologize to the fans for this performance.”

Ben Phillips reeled in five catches for 50 yards including the only touchdown reception of the day. Jeff Thomas, who had totaled 14 receptions in his first two games of the season, was held to just one catch for five yards. He was targeted 11 times.

Young-Battle completed 21-of-33 passes; three of those going for scores. Washpun ran for 152 yards on 32 carries; scoring once, while Jerry Jones caught seven passes for 103 yards.

Notes: With the win, Ellsworth avoided their first 0-3 start since 1998…The 24-point loss is the most lopsided Sims has suffered since a 45-8 defeat to Butler on 10/13/07 (Sims first season at Fort Scott)…Garden City had just three first downs the first 28 minutes of the game…Garden City is now 2-3 all-time versus Iowa schools…The Broncbusters allowed 10 sacks on Saturday bringing their season total to 38 in three games…Garden City did not score in the first quarter for the first time this season…The Broncbusters were just 4-of-17 on third down…Brian Michalowski’s defense was on the field for nearly 38 minutes…Garden City has now lost five straight games at home dating back to last season