“I’m very sad for Sean’s family, friends, teammates, our college, myself and anyone that had contact with Sean,” Broncbuster Coach Jeff Sims said in a statement. “He truly was growing and developing into a man with a bright future.”

Callahan teammates took to social media on Sunday to pay their respects: 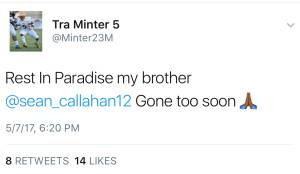 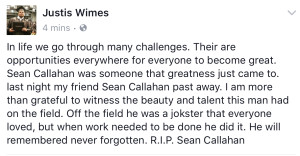 Callahan was a major contributor on Garden City’s 2016 National Championship squad. He started all 11 games at offensive guard and was named a second-team All-Jayhawk performer.

“I believe in God’s plan, and I am very thankful that he blessed all of us with having Sean in our lives,” Sims said. “Sean will continue to be a source of inspiration of how you can develop yourself from a young person who struggled at times, to a strong, confident, college graduate, national champion, and most importantly: a great son to his family.”

Callahan graduated from Gardner-Edgerton High School where he was listed as one of the top players in Kansas as a senior. He was named to the All-Eastern Kansas first team as an offensive lineman while helping the Blazers to an 8-2 record and playoff appearance during his junior campaign. As a sophomore, Callahan made the Kansas all-underclassmen team.

Callahan began his collegiate career at Highland in 2015. He started three games before leaving the program. He arrived in Garden City the following season and his impact was felt immediately. The sophomore helped pave the way to running back Tra Minter’s 1,200-yard season.